2017 was BUSY. The coworking space, Fathom Coffee, and our technology consulting company are all growing. We have about 70 coworking members, a bigger roaster on order, and some really amazing IT clients who consider us a part of their teams. We’ve accomplished a lot over the last year, and have some even more exciting things up our sleeves for 2018.

What did you do in 2017 that you’d never done before? Served on a non-profit board, played golf, .

Did you keep your new years’ resolutions, and will you make more for next year? I think so. I never posted my resolutions on my blog this year, but I did jot them all down on some post-it notes. I’ll take a look tomorrow and see how I did. I have a feeling I knocked a bunch of them out.

Did anyone close to you give birth? Yes. Tina had a daughter, Essie, on December 21.

What would you like to have in 2018 that you lacked in 2017? A vehicle with a functioning defroster.

What date from 2017 will remain etched upon your memory? Honestly, this year has been a whirlwind. Been racking my brain, and I can’t come up with one.

What was your biggest achievement of the year? Probably just making it though the entire year without having to go find a job and work for someone else again. 🙂

What was your biggest failure? Failing to recognize when people were taking advantage of my generosity and continuing to help those people at my own expense. Also failing to make it to NJ over the summer because my car is an idiot.

Did you suffer illness or injury? I got sick in late January with a nasty cold that left me with a lingering cough until April. In May, I tripped while I was running, and banged up my knee pretty badly — it wasn’t back to normal until September!

What was the best thing you bought? This sofa and swivel chair from West Elm to decorate my new house!

Whose behavior merited celebration? My brother’s for making some really tricky decisions, landing a sweet new job, and moving to Northern Virginia, without spending too much time worrying, sulking, or generally wasting time.

Where did most of your money go? Payroll, coffee beans, furniture, rent (business and personal).

What song will always remind you of 2017? Feel It Still by Portugal. The Man.  My brother says listen to this song while watching this video, and tell him it doesn’t look like they’re dancing to it.

Compared to this time last year, are you:
Happier or sadder? About the same.
Thinner or fatter? About the same.
Richer or poorer? Probably richer. I don’t have a lot of accessible cash, but I’ve got it all invested in businesses that are growing, so I’m going with richer.

What do you wish you’d done more of? Traveling.

What do you wish you’d done less of? Giving things away for free.

How will you be spending Christmas? I headed up to New Jersey for Christmas, as usual. I traveled with a coffee grinder and brewing kit, and a whole bunch of Fathom Coffee to brew and give away as gifts. It was a record-breaking 12 hours from the time I left VB until I got to my parents’ house because I took a scenic detour to the Eastern Shore National Wildlife Refuge and I stopped at the Nordstrom in Delaware to do some last-minute shopping on my way up. On Christmas Eve, we did lunch at my grandparents’ house with all of my aunts, uncles, and cousins. I spent about three hours making coffee there. After that, we swung by my Uncle Bobby and Aunt Gail’s house, where they surprised me with a delicious flounder francese and gluten-free pasta! Then I made my fourth annual late-night Christmas Eve drop-in at Regina’s before I went home to open pajamas and go to bed. Oh wait, before I went to bed, I wrapped my parents’ Christmas gifts in the basement. I did manage to work in giving each of them an empty box wrapped in Star Wars paper. Each said (on the inside of the box), “Want to go see Star Wars later?” 🙂 On Christmas morning, I opened gifts with my parents while we talked to my brother in Japan on Facebook Messenger Video. (Fancy.) We had a quiet dinner with my grandparents, and then we went to the movies. Tuesday morning, I had an early breakfast with Kristy, then went back to her house to see Frank and the kids. In lieu of my normal day-after-Christmas shopping, I visited a chilly warehouse full of mid-century furniture I can’t afford, and then I picked up Regina for a coffee adventure to South Plainfield! We visited Royal Coffee New York to pick up 268 pounds of Kenyan and Ethiopian beans for me to bring back to VB. We were treated to a pretty detailed tour of the entire facility, so that was pretty awesome. On the way home, Kerri called me out of the blue — she was in NJ to see her grandmother — and we were able to squeeze in a quick meeting for coffee before I met up with my mom and Ryan for dinner at Taka in Asbury Park. On Wednesday morning, I met up with Ed, Jane and Aidan for breakfast, which was fun and delicious. I love that with my New Jersey friends, we never waste a bunch of time talking about what we did that year — we just pick up old conversations right where we left off even if we haven’t spoken in months or years. My mom and I did a little shopping on Wednesday afternoon. Then Linda and Jimmy arrived, and we went out for Italian food with them and my Aunt Debbie. I left first thing Thursday morning to come home with my coffee delivery. 🙂 That was the longest answer to this question ever.

Who were your best friends? In alphabetical order: Amie, Jeff, John, Stephen, Vince.

What thing did you do that was meaningful to others? I helped a whole lot of people start and grow businesses.

What was your favorite TV program? The Marvelous Mrs. Maisel, Stranger Things

Do you hate anyone now that you didn’t hate this time last year? Nah. Hate’s a strong word.

What was the best book you read? Chasing Slow by Erin Loechner (Thanks for swapping books with me, Sheena!)

What was your greatest musical discovery? Beta Love by Ra Ra Riot.

*What was your favorite meal? The day we moved into the new house, I discovered we had this really cool griddle on our stove. The next morning — even though we didn’t even have anywhere to sit yet — I invited friends over for breakfast, and we all had pancakes, eggs, bacon, coffee, and mimosas around the counter. We’ve been eating pancakes at least once a week ever since.

What did you want and not get? A quick late-summer/early-autumn weekend trip within driving distance.

What was your favorite film of this year? The Last Jedi.

What did you do on your birthday, and how old were you? I was 36. Drank coffee we roasted from Maui that is the most amazing thing on the planet. Went to lunch outside at Rudee’s. Celebrated at 1701 with a cake. Went to dinner at Jessy’s Taqueria.

What one thing would have made your year immeasurably more satisfying? Not owning a cat.

What kept you sane? Coffee, ToDoist, Xero, Evernote, good music, YouTube videos about minimalism, moving into a new house and getting rid of a bunch of stuff.

What political issue stirred you the most? Still sticking with my 2015 answer: Donald Trump is ridiculous. Also, National Parks.

*What mystery from 2017 was never solved? Who is Oceanfront9?

Who did you miss? Grandma Tillie, Courtney, my brother after he moved away, my parents because I didn’t really get to see them much this year.

Who was the best new person you met this year? Drew Monroe at Prosper Insurance.

*Did you start any new traditions this year? We celebrated 1701’s first birthday with lunch and a cake! And hopefully it becomes a tradition going to the Chesapeake Bay Wine Classic Foundation’s Grand Auction because that event was pretty incredible.

Tell us a valuable life lesson you learned in 2017: Don’t run in shoes that are a half size too big. And pick up your feet.

Quote that sums up your year: “So how’s your Salesforce?” 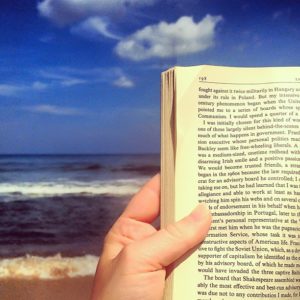